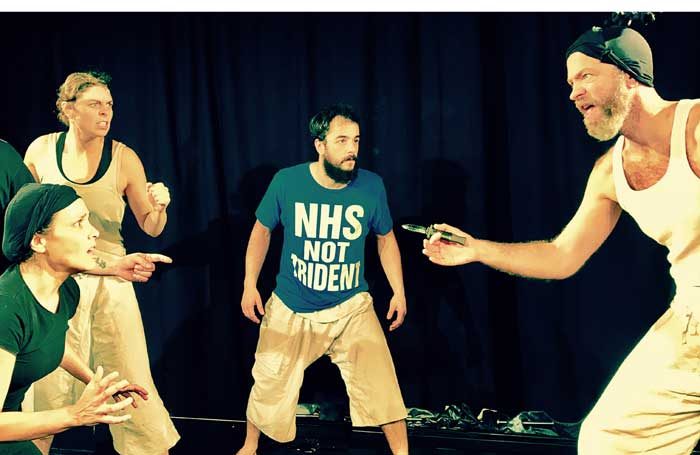 Does A Nazi Comparison signal the future direction of theatre?

The knee isn’t a particularly impressive joint. Knobbly ones used to win prizes at holiday camps and we really only notice them when they hit something low and hard like a chair, a supermarket trolley or, in the case of American Football player Colin Kaepernick, the floor.

It wasn’t a particularly showy or spectacular act of defiance. He didn’t hold a banner or have an angry hashtag on his clothing. He didn’t directly communicate his thoughts with his fingers or his mouth or any other part of his body. He didn’t speak to the press about his protest before and only did so afterwards to explain that he did what he did in protest of police brutality against black Americans.

No-one is currently contemplating putting Kaepernick on a podium alongside Rosa Parks but his world-famous action has resonated throughout his sport, across the nation and all the way up to the White House: Donald Trump has suggested team managers fire any players and staff who mimic Kaepernick’s gesture and, by extension, show solidarity with the footballer and his message.

Politics is seeping into other areas of the world beyond its traditional haunts. In being one of the most brutal and brutally political pieces of theatre in quite some time, Craft Theatre’s A Nazi Comparison holds an unapologetically impolite mirror up to modern politics as well as examining how the media and entertainment world are complicit in how key issues are represented.

We meet Clare, a young student reading media studies at a London university. She comes across a protest, falls for an angry young man and his revolutionary ways and becomes converted to his cause. Citing works including Hanns Johst’s Shlageter (which contains the often misattributed and misquoted line “When I hear the word culture, I reach for my gun.”), Clare gives an emotional speech in which she turns her back on what she sees as a world blind to hypocrisy and greed. She abandons her degree, moves in with her beau and his comrades and finds a new life there before events turn this Eden upside down.

There’s little room for subtlety in this highly kinetic play which interlaces facts, figures and explanatory video with some tight acting from a well-honed cast. Rocky Rodriguez Jr makes sure that the direction is turned up to 11 with much of the play pushing the pedal to the metal in its intensity. There are thankfully some intimate and delicately crafted scenes amid the maelstrom but make no mistake: your ears will ringing for some time after you come out, and not just because of the truthbombs regularly rained down.

Louise Goodfield is charismatic and very plausible as Clare; the sense that this young woman is voluntarily leaving behind a life for a heartfelt leap into the unknown reflects Goodfield’s own recent past.  As her lover, Craig Edgely is a suitably demagogic figure who comes across as a kooky combo of Charles Manson and the Unabomber. Clare’s mother (played by Helen Foster) is not the easiest role to bring to life as most of her lines are delivered in the key of “shouty shouty” but Foster does very well to find some depth in there. It is Thomas Thoroe as Clare’s father, though, in an incredibly understated and touching performance, that steals the limelight; there is an Obi Wan Corbyn ambience about this tall, bearded man which is very paternal but never smug or condescending.

In the words of another set of brash upstarts who highlighted many of the ills besetting the world, don’t believe the hype: A Nazi Comparison is not, as it claims to be, “one of the most controversial pieces to hit London since Edward Bond’s Saved”. Many of the facts mentioned and views expressed have been discussed for some time and the idea of anti-society youths fighting the system and each other has been done bigger and better, not least in the Sixties through Hair, A Clockwork Orange and Quadrophenia. Also, in its full frontal delivery, this play loses some of its impact amongst the often cacophonous yelling, the effect of which is possibly amplified by the size of this intimate venue.

Having said that, it is in its way a noteworthy production which could point to a new direction for theatre in London and abroad. Politics and the stage have never been strangers but, in its no-holds-barred, no-fucks-given approach to ultra-modern storytelling, A Nazi Comparison is planting a knee on the fertile territory of the London theatre scene. Craft Theatre’s work here deserves to cause ripples outward and encourage other companies to engage with the zeitgeist in a way that resonates with those who bucked the status quo and voted in unexpected numbers for unfancied victors of all political hues from Trump to Corbyn to Macron to Farage. It is not just political classes that are being challenged but also geography: from the UK to Barcelona to Scotland to Kurdistan, there are epochal battles going on to redefine decades- or even centuries-old borders. If the London theatre scene wants to thrive and survive and to reach past its traditional demographic, perhaps it needs to adopt a little of the Kaepernick attitude and find its own way to take a knee.

A Nazi Comparison continues at Waterloo East theatre until 28 October.