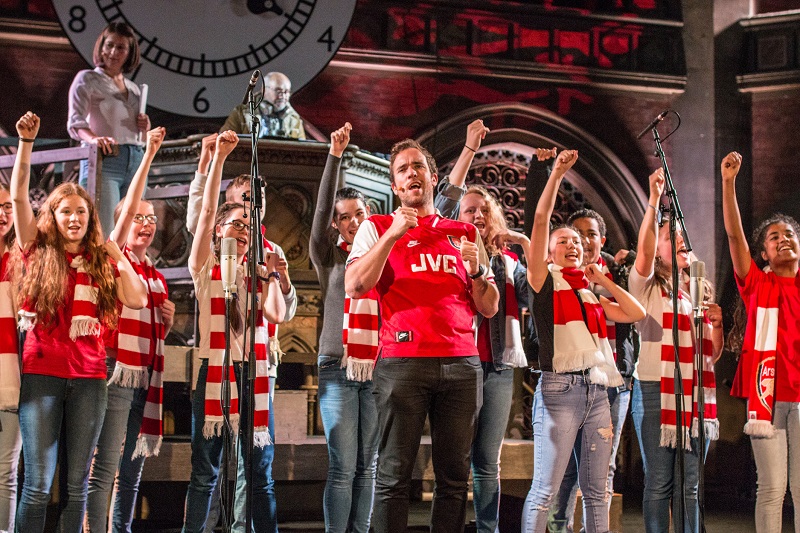 Whatever reservations one may have over the combination of the beautiful game and opera, it is hard to ignore the similarities. Some parallels are more obvious than others – opera has arias in the same way football has chants – but, as Fever Pitch: The Opera shows, it goes far deeper than that. Both are neck-deep in stories of battling against the odds and the resulting tragedy or triumphs. Both rely on a multitude of passionate voices to form a chorus. And operagoers have shown they are as vocal in showing their displeasure as any Gooner.

When it comes to a venue for this new work, the Union Chapel venue is ideal. As well as having the ethereal acoustics you would expect from a working church, you can walk out of the venue to Arsenal’s latest home in Emirates Stadium or the site of their old haunt in Highbury Square in under 20 minutes even when the team are playing at home and the streets are packed with Gooners off to fill the stands.

London hasn’t been short of quirky operas in recent years and this one’s star signing Robin Bailey has been at the heart of quite a few of them. He has appeared with OperaUpClose (who have brought their intimate take on works such as La Bohème, La Traviata and Don Giovanni to Soho Theatre, the Cock Tavern and elsewhere) and he was one of the outstanding singers in Vixen, an immersive version of Leoš Janáček’s Cunning Little Vixen which used headphones and the venue’s claustrophobic atmosphere to intense effect.

In Fever Pitch: The Opera, he plays Gooner, an Arsenal fan who sees to his team plumb the depths of defeat and despair before coming good. Highbury Opera Theatre have taken the Nick Hornby’s text by the short and curlies, stripped out the kind of verbiage only an Oxbridge grad would use when talking about football and produced a zinger of a production which is, for the most part, raw and compelling.

Quite what any Gooners under 40 would make of this work is unknown. They may be bemused by how their beloved team had rather a lean time of it in the Seventies and Eighties compared to the years of relative fame and success under Arsène Wenger. They may be surprised at the very sound of Arsenal fans singing (their last venue wasn’t known as the Highbury Library for nothing). Some may even feel homesick for a home they never knew. Either way, this is a story that all Gooners would and should relate to.

There are stars all over the pitch here. Robert Gildon often plays up front with Hale and, in each of this three different parts, is simply marvellous especially early doors in his role as Gooner’s father. Philip Protheroe as the teen Gooner is full of running throughout but lifts the first half with his passionate singing. As the commentator and timekeeper/fourth official, Tim Maby may only have a small part (not like that) but is played superbly and is wonderful deployed by director Bernie C Byrnes. Then there’s Joanna Harries, the super-sub who helps carry the second half to a successful conclusion with her evocative vocals.

Elsewhere, the opera makes great use of a range of younger singers. Putting teenagers and pre-teens in the role of Arsenal fans is a touch of genius; hearing them chant “Wanker, wanker/You’re a disgrace” will never not be funny.

Scott Stroman’s music here is everything. He has the tough task of sonically recreating a wide array of atmospheres, not least the wall of sound that is the football terraces, the boisterous banter of schoolchildren and the more prosaic scenes which give insight to the central characters through words and melody. His a cappella version of Arsenal Til I Die in this of all spaces sends shivers all the way up and down the spine and isn’t something that will easily be forgotten. Tamsin Collison’s libretto does well to bring out Gooner’s journey from reluctant fan to someone who goes as far as putting football before love but the exposition is a little too obvious and blunt in places, especially for a work of around ninety minutes (no, it’s not a coincidence).

To borrow a well-worn cliché, it’s an opera of two halves. Not the halves separated by the fifteen-minute interval but the “halves” separated by the invisible fourth wall between performers and audience. Those in the pews who feel a deeper connection to the Gunners and its history have the most to gain from this production; when they are in full voice, it is 1-0 to the Arsenal and it is hard to feel that any other club could inspire a work like this. There is plenty here, though, for those who want to see just how this art form is “doing a Leicester FC” and taking armchair commentators who thought they knew it all by surprise; in opera as in football, there is always potential for something we have never seen before.

Fever Pitch: The Opera continues at Union Chapel until 24 September.